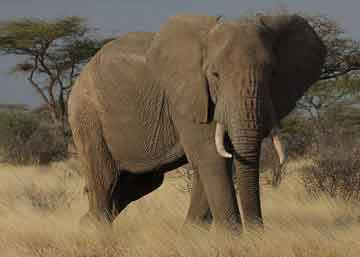 An adult African elephant can reach a massive weight of 7 tons and be as tall as 12 feet. The African elephant is known for its big ears. These large ears allow them to lose heat to keep them cool. Both male and female adult African elephants grow ivory tusks which are actually very long teeth. Tusks are used to dig up roots and remove bark from trees. Unfortunately, elephants are illegally hunted by poachers for their tusks.

The elephant’s trunk is actually an elongated nose that acts as an appendage to grasp items as small as a berry or a single leaf or as large as a massive branch. Elephants also use their tusks to touch one another in an affectionate way. They can suck up to two gallons of water up into their trunk. They then put their trunk into their mouth and pour the water directly down their throat. Elephants can also use their trunks like a snorkel when they swim in deep water. Baby elephants suck their trunks for comfort much like humans suck their thumb. Adult elephants often use their trunk to nudge a newborn calf to its feet or to help another elephant that is stranded in the mud.

The African elephant can eat up to 375 pounds of food per day consisting of roots, bark, leaves and fruit but their inefficient digestion system only digests about forty per cent of that food. Elephants spend between around 18 hours a day feeding. Elephants utilize their trunks to dig up the ground where they find certain minerals such as salt and in doing so they create cavities that provide homes for various types of wildlife.

Female elephants travel in large familial groups with their young, led by one single older female known as the matriarch. Males tend to travel alone or in small groups of their own. Elephants have been known to display grief, anger and joy. They also love to play when they are relaxed.

Due to the hot climate that elephants live in, they often spend time at watering holes spraying water on themselves, taking a mud bath and coating themselves with a thin layer of dust to keep cool.

Elephants mate during the rainy season and have the longest pregnancy of any animal at 22 months. They give birth to a single calf that can weigh up to 250 pounds.