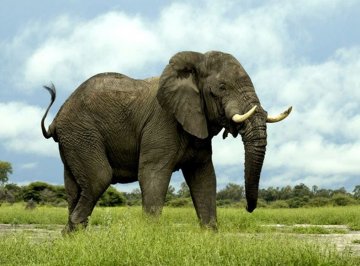 The weight of an elephant varies based on the species and age. An adult African elephant is relatively larger than its Asian cousin and can weigh up to 7000 kgs (about 15,000 lbs or 7 tons). This makes it the heaviest land animal on the planet.

The Asian species of elephant can weigh up to 5400 kgs (about 12,000 lbs or approximately 5.5 tons). Within the Asian elephant family, though, the weight of the subspecies tends to vary. Of all the Asian elephants, the Sri Lankan elephant (Elephas Maximus Maximus) weighs the most.

Adding Weight for a Lifetime

At birth, baby elephants weigh around 91 kgs (200 lbs) and are around one meter tall. Wild elephants generally weigh less and are shorter compared to the elephants that are typically found in the zoo. The reason for this could be lack of water, food, and no medical care in the wild.

Elephants continue to grow for considerable periods of time compared to humans. On average, the African elephant grows up to the age of 30 and keeps adding weight. It does not come as a surprise that elephants can eat a lot. Something as big and heavy as an elephant must have a big appetite. An average adult can eat up to 136 kgs (300 pounds) of food in a single day.