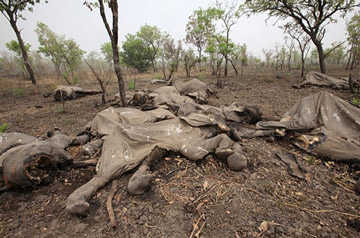 According to legend, the elephant graveyard is a place where elephants go when they reach a certain old age. Most people believe this to be a retreat of old elephants and dying elephants. This is so that they may die away from others without hindering any progress of those left behind. This legendary grave lures dying elephants by use of a great supernatural force and it is believed to be in the Saudi Arabian desert.

Theories of the Graveyard

There have been several theories given to prove this myth’s origin. One theory talks about certain people finding a number of elephant skeletons together in one place. Other people have suggested this term may have sprung from die-offs, such as the one found in Saxony-Anhalt which had 27 skeletons of Palaeoloxodon antiques. In this case, tusks from all of these skeletons were all missing. This means that a group of hunters may have killed the elephants in a single spot or some scavengers may have removed these tusks from natural die-off.

Other theories have focused on the behavior of elephants during its older stages. The theories suggest that starving elephants may gather in a place where the food is easier to find and therefore they die there.

According to Rupert Sheldrake, a biochemist and parapsychology expert, elephant skeletons are in most cases found near some permanent sources of water. This may suggest that the elephants that suffer from malnutrition try to find these sources of water to improve their condition. If the elephant does not improve, it develops low blood sugar and slips into coma and eventually dies. The older elephants with worn out teeth will try to look for soft plants around water and therefore die near the water sources.

The attraction of the elephant graveyard is extensive. Some greedy hunters and explorers dream of piles of ivory that lie in an elephant’s graveyard. They even fantasize about the huge tusks and how they could benefit from this. There are many beliefs surrounding the elephant graveyard since those who return from the quest for this graveyard give tales of confusion. To date, this is a mystery that is yet to be explained.