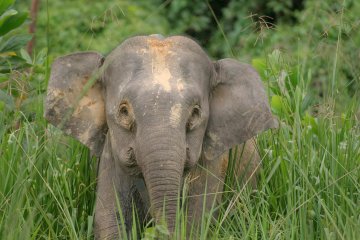 Pygmy elephants live only in the forests and lowland river areas of Borneo. They feed on banana plants, palm trees, fruit and grasses. They are the largest land mammal in Asia, yet the smallest type of elephant in existence. They are also the most endangered species of wildlife in Borneo because their ivory is sought after and the forests they depend upon for food are quickly being cleared.

Not much is known about Borneo’s pygmy elephants. There has been speculation that the elephants originally came to Borneo by way of Java or Sumatra. Many thought that the original elephants might have been presented to the Sultan of Sulu as a gift.

Another theory was that these elephants had descended from elephants that were simply released on the island of Borneo sometime between 1500 and 1700 when elephant trading was big business. Today, thanks to modern science and DNA testing, scientists realize that Borneo’s pygmy elephants are a completely separate and unique type of elephant.

Elephants in the Rainforest

Although Borneo is a very large island, the thousand pygmy elephants who remain there are allotted very little of its space. They exclusively stay in the rainforests located near the rivers of Sabah, Malaysia. This is an excellent location for them because it offers ample food and water along with proper mineral supplementation provided by the rivers.

This is the only area where pygmy elephants can live happily because of the encroachment of mankind throughout the rest of the island; however, the progress of mankind continues to diminish their habitat.

Because there are now so many people in Borneo, elephants face a great deal of danger from hunters seeking their ivory and palm oil ranchers who deforest the elephant habitat in order to plant palm trees. Logging also devastates the elephant habitat.

As their habitat shrinks, pygmy elephants often seek food outside of the rain forests, and this can lead to problems when they raid gardens as it damages the property of humans.

As logging, palm oil plantations, and other developments steadily encroach upon their habitat, elephants have less and less to eat and are cut off from former pathways that would allow them to move from place to place in search of food.

Additionally, diversity is lost because elephant groups (usually consisting of about fifty animals per group) are unable to connect with one another. For these reasons, world and local conservation groups are working in concert with local wildlife and forest conservation agencies to set aside good lands to serve as elephant sanctuaries on Borneo.

It is imperative that they succeed in establishing a safe haven for these pachyderm survivors. If they do not, they may become extinct before we even begin to understand the nature of the unique pygmy elephant species.